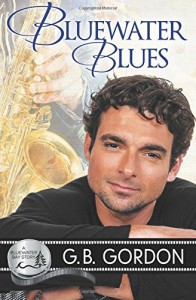 When you take a chance on a new-to-me author and it pays off; isn't that one of the most satisfying feelings ever?

I have never read any of G.B. Gordon's books before. I honestly didn't know what make me pick up this book in the first place. Most probably it was the blurb, which I kept seeing when I followed the blog tour. It mentions an autistic character, and that just intrigued me.

I loved the three characters... The adorable bumbling Jack Daley, his sister's keeper, who protects their secret of the past that drive them through Bluewater Bay in the first place. Mark Keao, the costume designer with autism who captures Jack's eyes. As well as Margaret, Jack's autistic younger sister, who doesn't really function as better as Mark, but still has a significant role of pushing Jack and Mark together. I thought they all shone with their own characteristics, complimented one another and made up for a very compelling story.

I loved Gordon's exploration towards Mark's and Margaret's autism ... though Mark has more spotlight than Margaret. It is understandable since he's Jack love interest and has his own chapters, while I only knew of Margaret from Jack and Mark's perspective. I thought Jack and Margaret's past were a bit dramatic but not truly over-the-top. It could happen; what with so many [disgusting people out there, trying to take advantage of a disabled person (hide spoiler)].

Jack and Mark's romance also developed well ... I liked the fact that Mark's autism brought something to the table and added a flavor to the relationship. I mean, Mark didn't like being touched, but both men found a way to work around it. Which shows that people who truly love each other can work together albeit their differences.

And last ... I LOVED Gordon's writing. There's a lyrical quality to it that just clicked with me right from the very first chapter. Gordon writes this book using two different point of views. Jack's chapters all using third person narrative. While Mark's is in first person narrative.

I admit that sometimes, I had trouble switching from Mark's chapters to Jack's. Probably because Mark's first person narrative made me feel like I was deeply rooted in his thoughts, so I felt being yanked out suddenly when the chapter switched to Jack's third person. Like there was a sudden distance between myself and the story. However, it didn't annoy me too much to reduce the solid 4-stars I am giving this story.