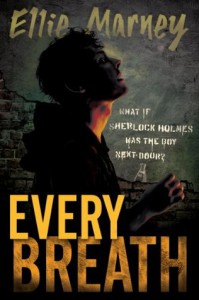 First of all, thanks for the recommendation Katie and Edna.

I didn't immediately 'felt' for this book when I started. Katie and Edna described this as young adult mystery -- though both also emphasized on the relationship rather than the mystery. So in the beginning, I was focusing on the mystery part. I am a huge fan of mystery books, thanks to growing up with Agatha Christie. In that sense, when a book is described as mystery, I tend to focus on the case (the investigation, the conclusion) rather than the characters. That is why I prefer mystery with detective/cops/P.I. characters because I feel they are competent to deal with the investigation part.

So when I started this, I totally didn't know what to do with it. Both Mycroft and Watts are only high school students -- and it seems that they have their own personal issues. Mycroft with his brilliant mind but not very well-adept socially. Watts' bitterness about her family moving to the city (which I cannot relate at ALL, I like living in the city, I cannot imagine living in rural areas of Indonesia, NOT even a bit!). 'What is this?' I thought.

But then the more I got into these young people's lives -- especially after they found out about the homeless being murdered, the more I cared about them. Then somehow their relationship took the front seat, it was AMAZING, and I loved every minute of learning about them. The intense chemistry between the two, the fact they are truly good for one another, definitely won me over. And the
hospital scene
(show spoiler) actually made me all teary eyed.

So yes, this was so darn good! I even liked the mystery part too -- I guessed the villain few moments before Mycroft did :). I would definitely in for the sequel (the US version would be available in September).