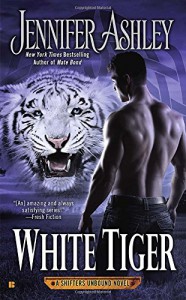 Kendrick is a white Tiger shifter who has been a Guardian of un-collared shifters who have been living in secret. He first appeared in the novella, Bear Attraction, when Rebecca and Walker attacked their hiding place while looking for a missing woman. After that, Kendrick has been on the run with his cubs and adopted teenage boy. Addison is a waitress in a diner whom Kendrick and his boys meet while they are having their dinner and pies…

White Tiger is book #8 in Ashley’s long-running Shifters Unbound series. It started to get a little crowded with a lot of players! I got dizzy with all the name of the characters thrown in this book as I tried to remember who was who *laugh*.

I enjoyed this but not as much as I did the previous three novels. Aside from the numerous secondary characters that I thought stole scenes from Kendrick and Addison, I thought the romance was rather undeveloped. I wasn’t invested with their relationship. Maybe because I also thought that, personality wise, neither Kendrick nor Addison stood out among the rest of the characters. Yes, Kendrick was a rare white tiger, but that was all he was to me. Same as Addison, just another nice addition for the heroines in this series.

I also didn’t think the main plot of this book – someone being revengeful against Kendrick – added anything important in the grand scheme of things, with the progress of shifters getting fake collars or the part with the Fae (which started to be developed in the previous stories).

To be honest, I was more intrigued with the secondary characters, namely Zander the polar bear healer and Ben the goblin. I thought they were more interesting compared to Kendrick. I also loved Kendrick’s cubs and friends. Heck, even the plot about Tiger (the hero from book #5, Tiger Magic) and his pregnant wife was more interesting.

In conclusion, it was a good addition and I liked it. I just didn’t love it. But I am looking forward to next book since it will be Zander’s book.

The ARC is provided by the publisher for an exchange of fair and honest review. No high rating is required for any ARC received.
paranormal Shifter Amis review 3 5 stars 2016-read