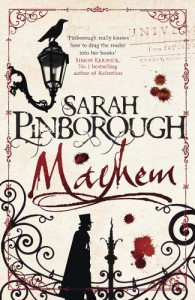 On one hand, the way that Ms. Pinborough used real-life persons and used murders was totally different than what I used to read and it made for quite an interesting read. Apparently The Thames Torso murders that happened in 1887-1889 were as gruesome as the Whitechapel murders, conducted by Jack the Ripper within the same period. However, because no heads were found, and the bodies were heavily mutilated, the victims in Thames Torso cases could only marked as 'found dead' instead of being suspected as murder victims. Anyway, people involved in both cases, like Dr. Thomas Bond and even the Polish young man later suspected of as Jack the Ripper, became the characters here.

On the other hand, the way that Ms. Pinborough adding supernatural element to the unsolved murders was not to my heart's content. I guess I was more in favor in straight-up murder investigation. To be perfectly honest, I didn't read the blurb completely for this one, so I wasn't 'prepared' for the supernatural element. It was good but not exactly what I was expecting. In addition, the multiple perspectives (only Bond was written in first-person point of views) and non-linear storytelling kept pulling me out from the story, and I wasn't as invested with the characters.

In the end I could only go with my 'okay' rating for this one. I'm not sure I will check the sequel, though. Even if I am kinda intrigued. However, I might want to check out other mystery books of Ms. Pinborough.

PS: IMHO, the cover for the UK edition is definitely too 'pretty' for the tone of the story...
mystery Historical supernatural 3 stars Amis review 2015-read